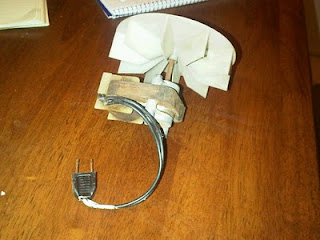 Since I've lived at my current residence, the bathroom fan has been inoperable. Unless you call a humming noise emitted from it until it smells like it's burning, operating. With more ambition than ability, I headed to the "Depot" (that's what we regulars refer to it as). I had two items in mind. A red flapper for the bottom of the toilet and a replacement fan.

First, I asked an employee that was carrying a record breaking pot belly around, as he was pricing some mundane item. His orange shirt alerted me to his presence. Without looking up he blurted out isle 23 in plumbing. I headed over and found that the one that I brought in with me, the broken one, was out of date and was not going to be easy to replace. A little guy about 30 made the mistake of greeting me as he walked by, so I asked him about my fan replacement. Now is it just me, or does every Home Depot employee know everything in the world about repairing anything you need repaired. They just act so matter-of-factly about it, like they just completed the same job this morning. And I ALWAYS fall for it. This little guy, about 5' 6" said, "We don't carry that particular model anymore, but between you and me, just buy the cheapest one and remove the motor, they're all the same. Then he actually takes out the fan and shows me. I fall for the Home Depot trick and buy it, along with a toilet flapper, that he also knew exactly where it was, since he had just replaced his this morning too.

I proudly walk into the house, "Mission Accomplished" and in a record breaking amount of time. I change into my work clothes, which means I took off my shirt and began the job of removing the motor from one fan to install it on the old frame. After removing anything that looked like it could be removed, I suddenly realized it was not going to be possible to remove it completely from the housing bracket, because the fan portion was on the other side of the bracket and it was not removable!

Suddenly my mind went whirling back to the time that I needed a toilet top tank and a Home Depot employee told me that I can buy a universal top tank that fits all commodes. That was just NOT TRUE! This little short guy must have been his cousin! It's a Home Depot conspiracy!

When I realized my $15 new fan was never going to work, I went into the laundry room and cannibalized the fan in there, that fit the bathroom perfectly. Whoever uses a laundry room fan anyway!

The thing that bothers me the most is, I told the short kid how helpful he was.
Posted by Things I Left Behind at 9:54 PM 2 comments: 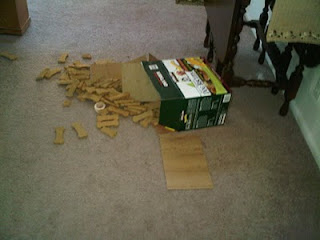 I was awakened this morning from an unfamiliar crash. The crash was this 15 LB box of dog cookies from Costco going crashing to the ground, off the table that it was previously resting upon. The table just next to the mess. There in the middle of 500 cookies was Macy, laying on her back with as many cookies in her mouth as would feasibly fit. One look at me and she cam running over, proud of her accomplishment, even though I was giving her the old "Bad Dog" shame we all know. I was literally laughing my ass off, as Macy leaped up on the pool table to discuss this with me face to face. Did you know that 500 dog cookies will not fit in the same exact box they originally came in, once casually removed?

LJ bought Macy one of those fancy apparatuses instead of a collar. It wraps around her front legs and snaps around behind her. It's a harness for walking your dog, but I've always been of the belief that it allows the dog much more power in pulling, as if she has here entire body to pull with instead of just her neck. Every time LJ takes out the harness, Macy gets all excited. Even more excited than when she would go for a walk with just the collar. I just found out that LJ told Macy that it was really a training bra!
Posted by Things I Left Behind at 8:03 PM 3 comments: