AT&T Did a Number on Me, (not a phone number)

I just found out that Dolly Parton is a real live human being and not a Barbie Doll that was lifted to extreme heights on a platform, during a lightning storm, by a fellow named Dr. Frankenstein! For some reason that seems likely to me for an explanation. Oh well, it's one of those nights.

I did accomplish something today worthy of writing about. I have been a customer of AT&T's for 22 months now. I have a Blackberry telephone that I'm more than pleased with. I pay $111.00 per month for my privilege of being an AT&T customer. Accidentally, I learned that everyone else that has more minutes than me is paying less, so I called AT&T and spoke with a representative and she reduced my 900 minutes per month to 450 and allowed me to keep my rollover minutes, which is why I chose AT&T to begin with. That reduced my bill by $20, plus she explained that I would be allowed to have all mobile to mobile minutes free of any charge in an unlimited fashion. I reiterated, "all carriers"? She said yes, not just AT&T as before. Great, so my 450 minutes will only be affected by landline calls, plus I've got over 7000 minutes accumulated in my rollover minutes. I was more than pleased.

Then I spoke with another friend that also has AT&T and he told me he just got his data reduced to the minimum of 200 from unlimited and that saved him $20. So today, I called the mother company (AT&T) again and this time got a young lady that actually spoke English without any accent. She lowered my bill by another $20 per month by reducing my unlimited package to 200 Megabits. My bill is now $40 per month lower. I asked Sara to reiterate my package again and she omitted mentioning my mobile to "any" mobile portion, so I asked her about it. She said no, that is not on my package. I began getting irate as the first rep insisted it was good forever. We went up and back and Sara began apologizing for the previous reps mistake. I stopped her and explained that when a representative of AT&T enters into a contract with me, she is representing the company and "I'm sorry" just doesn't cut it.

Now I've been on the phone for about 30 minutes by this time and she asked me to hold while she spoke with a supervisor. Another 15 minutes went by when she asked if she could call me back? I mention that the conversation I'd had with the previous rep was taped according to what the message told me before I entered into a conversation with her and that if she had any doubts, she could go back and listen to the tape. She said they really don't use those and she has no way of finding out which location the girl came from. That's when I stopped believing her.

An hour later she finally returned my call, evidently the supervisor was out having a cigarette and here was my offer. She cannot do what I want, but she can offer me unlimited "any" mobile to any mobile plus unlimited texting that I really don't care about, for an additional $10. Now that's a good deal, I suspect, but NOT when I was given. I caved, mostly because I was bored with it and agreed to pay the additional 10 bucks. My contract is up in 2 months and I'm going to have to rethink AT&T. I'm also eligible for an iPhone for $99 and that will require more gigs if I get it. Plus it has a better camera!

Here's another thing. AT&T knew for the past 22 months that I had been oversold when I first got my phone and for 22 months they let me pay $40 too much. That doesn't create that warm and fuzzy feeling about AT&T, does it?
Posted by Things I Left Behind at 8:49 PM 1 comment: 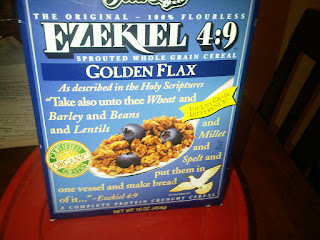 I haven't been writing very much of late, the thought of sitting down in front of a computer screen just doesn't appeal to me lately. I was casually sitting on my reclining chair, pivoting between Letterman and Leno when I realized that a bowl of cereal sounded good. I had just watched a commercial about the holidays and how you have to watch your weight, so after arriving in the kitchen, I studied the inventory of cereals. I came across one that didn't look familiar, nor had I ever even heard of it before, perfect. I tried a finger tip of it and it reminded me of a whole grain type and it wasn't sweet at all. It was called "Ezekiel 4:9" and beneath that it said, "As described in the holy scriptures". Hmm.... How bad could it be, it's from Biblical times?

So I poured a generous portion of this shit and on my way to my reclining chair, I knew in the back of my mind it was going to end up in the garbage can. Being the open minded man that I am, I figured I'd give it a chance. If nothing else, it was high in fiber (I think). I settled in and began crunching on this stuff, when I realized the first spoonful was still in my mouth and about 2 minutes had gone by. A commercial came on the TV and I suddenly thought of the desert and wondered what it would be like to take a spoonful of desert sands, complete with milk and sugar and put it into your mouth. That's when I spit the shit out! It was like eating your way out of your grave!


Here it is the first night of Hanukkah and here I am a Jew, eating from the Holy Scriptures. I'm lucky there was no lightning involved!
Posted by Things I Left Behind at 10:42 PM No comments:

The night was exceedingly dark with no moon and the only thing that presented themselves were shadows. The time was about 8:30 and after a summer (her first) of above average temperatures, Macy has been enjoying the rather cold evenings we've been having, by barking and chasing off the would be imaginary trespassers in the neighborhood or she's planning a special rendezvous with the neighboring dog next door. Either way, she's been content to spend her time outside during this time of the year.

One thing I must note, Macy is NOT a water dog. She's either petrified of it from some time before she entered our household or she is just plain afraid of the water. If you want to get rid of Macy, show her a hose or pretend you're going to push her into the pool. She immediately tucks her tail between her legs and cowers away. Because she tends to be annoying when she's on one of her rants out there, it's just as obvious when it's too quiet. So during the commercial break of some TV show I was watching, I got up to check her and there was no Macy to be found. I called out her name repeatedly but no reaction. I poked my head into LJ's room through her sliding glass doors and asked if Macy were in there and she replied, No, LJ had taken a bath. I went back outside and searched the yard and just by chance I looked towards the pool and kind of noticed one spot that was darker than the rest and sure enough, there was Macy, nose up, holding onto the side of the pool for dear life. The only thing I could see as I got closer was her two front paws on the side and her nose sticking up and God only knows how long she's been in there. The water was almost freezing, as I pulled her up by her two front paws. Macy weighs about 80 LBS and soaking wet she was even heavier, but my adrenalin played it's part and I was able to pull her out with one try.

She bee-lined it towards the sliding door that I had left open and didn't shake off until she was safely inside, Macy would only walk next to the wall with her back kind of hunched and acted just strange. We dried her off and Julie took her into her room for some much needed pampering. About 3 minutes later Julie came out of her room and announced that Macy was receiving visitors now and I slowly entered and there was Macy, the princess, in the middle of Julie's king sized bed with pillows piled all around her just taking it all in.

I was kind of worried that she had gone into shock, so I looked it up on the Internet and it said to check for her gums appearing too light in color, but Macy's were a rosy pink, so I didn't worry too much. The following morning she came running out of Julie's room and jumped up on me, then the pool table and I knew she was back to normal. She had me a bit worried though. This summer, the first thing she learns is either how to swim or at least how to find the steps in the pool. These pups are worse than kids!
Posted by Things I Left Behind at 8:30 PM No comments: