It All Came Tumbling Down... 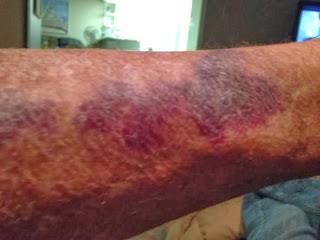 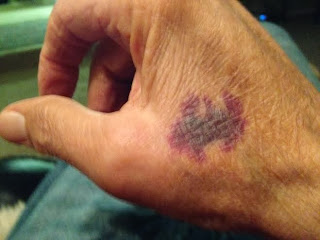 I was writing an email to my son, explaining what exact type of razor blades I use and finding them has presented me a problem, hinting at what a good present for me would be, when suddenly there was a knock on my front door. I'd don't know if you're like me, but when someone knocks on my door unexpectedly, I usually assume it's a Jehovah's Witness and I prepare to tell them that, "I didn't see the accident", prior to closing the door in their faces! Or, it's someone, somehow, that wants money in one form or another. Whether it's to win a contest at school, or they're selling magazines or candies, or their younger brother! It just never behooves me to answer the door. Throwing caution to the wind, I leap to the door and whip it open to see a strange couple, man and woman, standing there. Shocked somewhat, I wait to hear their spiel. He says, "I'm your neighbor across the street and I just bought a new sofa and it's too heavy for me to lift off the truck by myself, can you help me?" My mind immediately goes to 2005 when some doctor poked a tool through my heart while doing an angiogram, that I probably didn't need. So naturally, I told him I'd love to! Couches are not that heavy and I've moved my own sofas around at times, so why not? I get to meet a neighbor and help someone at the same time, win/win. He didn't even mention once that it was a hide-a-bed type that contains a metal frame and foam rubber mattress. I grab a sweatshirt and walk across the street to where he has a truck backed up almost to his front door. He continues to tell me it's really heavy, but I am thinking, heavy for who? Maybe his little wife, ha ha! Not me, certainly. I lift my end off the truck and walk it backwards towards the front door and think quietly, "this thing is seriously heavy, like 200 lbs heavy! Or, I've weakened considerably in my 67 years?

We reach the threshold and I specifically stop to lift my left foot over the bump and that's when he pushed forward, I think. The next thing I knew the heavy huge, sectional, hide-a-bed, sofa was on top of me and I was obviously lying beneath it. I remember saying that we are going to have to turn it at a certain angle to fit it in the doorway, since it had an attached love seat section, then BOOM, it was on top of me! The guy kept saying, "I told you it was heavy, over and over again. Pretty soon he was lifting it off of me and then I started feeling embarrassed. You know the feeling when someone says, "Hey, your fly is open"? Well, this embarrassment was about 100 times worse! I dropped his new Christmas sofa!

I don't think anyone helped me up. I recall getting up like it was nothing and kept says how sorry I was, that I guess I tripped on the threshold. Then they rushed me out the door for some reason, probably not realizing that the law suit starts when I get home, not at their house! You know, they didn't even come over to see if I were okay or bring me any Christmas cookies!

Here's the moral to my story, "DON'T ANSWER THE DOOR"!
Posted by Things I Left Behind at 4:48 PM No comments:

Since occupying this residence in March of this year, I've spent a large amount of time dealing with repair people. Virtually nothing in this place worked properly and if it did work, it leaked. First it was the washer and dryer, both. The dryer wouldn't heat up and wasn't even connected electrically or vented and I soon found out why. The washer wouldn't fill with water and I was advised that even though it appeared at the residence, it was not listed as part of the residence, (my error). So, I gave them away to the first repairman with a truck, that was willing to haul them off, upon the landlords instructions. When I asked for that authorization in writing, I was ignored. The kitchen faucet was frozen in place and needed to be replaced. The garbage disposal inoperative, frozen with a burned out motor and replaced. The dish washer leaked like a sieve. The water heater wouldn't heat water. The replacement washer and dryer, (mine) were never vented and I had to pay to repair my own washer. The toilet seat in the master bath required either a seat belt or replacement, I bought a new one. The landlord sent two plumbers, right off the boat from Bulgaria, that had little command of the English language and less experience in plumbing and they were in charge of this myriad of repairs. NOTHING went right. To flush the toilet in the master bath, the one I use, you have to hold the handle to make it continually flush the toilet. They put in the wrong flapper. The roof, although new, leaked like crazy and continues to leak after 5 different repairmen have been out, which leads to the reason for this text.

When the new roof is exposed to rain, it leaks down through the cold air return. When the roof is not exposed to rain, it continues to leak there, as well. A week after our rather heavy rainstorm, the roof continued to leak for about a week, almost ruining the new carpeting that the landlord supplied. I started with putting pots and pans down, but quickly realized that it was not that severe and reduced the item to huge old ash trays that have been laying around my garage for 30 years, as that is when I quit smoking.

After being ignored by the landlord, I finally secured the number of the roofing company and called for yet another appointment for repair. The roofers ignored our appointment twice and finally showed up a day late, about 5:30 PM. on Tuesday, of this week. By the time they got here, it was pitch black outside, but the roofers assured me they had flashlights to perform my water test. Like second story men, they set up a ladder in the dark and climbed up on the roof, but only one of them, the boss of this outfit. He was a young, tall guy that SCREAMED whenever he spoke. I mean a really LOUD talker. Embarrassingly LOUD! I want to hold me ears, LOUD! The second guy, a guy named Rudy was instructed to go into the house with me and watch for water. Rudy asked me where the water was coming in and I told him to look at the ash tray on the floor and go up! Rudy went out to Billy Bob and handed my hose up to him and then came inside and went on patrol, watching for water. About 30 minutes later, I went to check on Rudy and he was laying on the floor with his trusty flashlight next to him on the floor. My real goal was to check on him to make sure he was going though my drawers. When I approached, I noticed that his eyes looked a little sleepy, like I had awakened him. He kind of jerked upon seeing me and so I offered him some refreshment, possibly a bottle of water? He said, no, he was fine. Just then, Billy Bob came walking through the front door and announced screaming, EVERYTHING LOOKS FINE UP THERE, IT MUST BE A FURNACE PROBLEM, as my ears were ringing from his loud intrusive voice, suddenly, Rudy jumped to his feet and yelled, LOOK, water!!!!

Billy Bob, runs outside and back up the ladder, as if suddenly he was going to be able to see where the water was going in. Now water is literally pouring into my house, running around like a waterfall and Billy Bob comes back down, trudges through the mud in doing so, and this time, after he dragged mud into the house, I stopped him at the door and he started screaming again. IT LOOKS FINE UP THERE, YOU HAVE A ROOF YOU CAN BE PROUD OF, and tells Rudy to pack up the tools and ladder. As Billy Bob stands there YELLING, I casually, trying desperately not to SCREAM, because that's a natural reaction when someone
SCREAMS at you! I'm now worried that the neighbors will think there's a fight here. I mention that if everything looks fine, why is the water drenching the carpeting? He confesses that there was one spot he wasn't sure of, where the water could be coming in and then yells, "RUDY, PUT THE LADDER BACK UP"! Now it's about 7 PM and he climbs back up there with his trusty caulking gun and returns 10 minutes later with his going away words. WELL, IT'S ALL DONE. IT SHOULD HOLD NOW, IF IT DOESN'T, THERE'S NOTHING HE CAN DO! I went back into my house feeling sorry for Rudy. He has to hear that stuff everyday! If it leaks again, I'm buying bigger ash trays!
Posted by Things I Left Behind at 4:11 PM No comments: