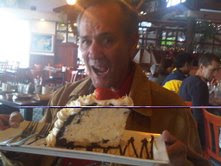 California, the land of enchantment. Wait, that's New Mexico... California, the land of high prices is more like it. I guess they package the sun and ocean and lack of free land to their prices, because they sure know how to make things expensive there. A simple lunch was $50 and their gas must be special and frankly I'm glad to be home to Arizona where it doesn't rain and the sun is out all of the time..

Leaving our great state on Wednesday evening broke every rule I have about driving. Mostly, NEVER drive when everyone and their Aunt Ethyl are on the road, such as the evening before a national holiday...

Wednesday night found MJ and I knee deep in the worst traffic I'd seen in our humble town since we developed our freeway system. Two hours into our drive we were still on the I-10 trying to leave the Phoenix area when suddenly traffic broke from 10 MPH to an amazing 65 then 75, then infinity.... It seems that MJ is a fan of Love's, a roadside convenience market that sold Subway sandwiches and gasoline.. We/I decided on splitting a large diet coke and getting back on our way. I turned to pay and got into a line that took 15 minutes to achieve finality, just to pay for our Coke. Hopping back into her car, we headed West again. At least it wasn't a Cracker Barrel.

We slid into San Diego about 1 AM and MJ showed me to her condo. It was spacious, pleasant and beautifully decorated. I was mostly interested in the bed! It was cold there and her bed is a blow up type from Costco and it didn't have a mattress pad, which has never been an issue for me, until I was asked to sleep on an ice cube. The air inside that mattress was about 55 degrees and would not warm up. There was NO getting warm the first night, even with MJ's body heat that I was desperately stealing!!! Now don't get the wrong idea, it was just for survival. The second night, we took the time to use the condo heater and put a mattress pad on her blow up mattress and that pretty much eliminated the frost bite issues. At one point the first night, I awakened thinking I was aroused, but it turned out the poor thing was just frozen.

Thanksgiving Day found us trying to get the TV to work without cable, as it was not hooked up. That pretty much eliminated any football for the day, so we improvised and I watched MJ's talents in the kitchen, which were pretty impressive. MJ can heat up food like nobodies business. We had turkey, stuffing, mashed potatoes, gravy, sweet potatoes and cranberry sauce, not forgetting pumpkin pie. We were totally stuffed after beginning out treat with a blessing right out of the bible... Turns out MJ's a good "Thanks Giver".

After our feast, we went for a long walk on the beach, wearing thongs (shoes) and walking hand in hand. It was beautiful weather and we watched the surfers and the fisherman and generally walked my poor feet off. We headed home for our nap and slept like a couple of kindergartners after a long recess.

Keep in mind, we were to be there for 4 days without the advantage of TV or even music, so creativity was paramount.. I suggested a board game, but there was not one. We were permitted to steal Internet occasionally when the Gods allowed for it, but otherwise we were pretty much on our own. We read, played on MJ's computer and attempted a few card games, sans the cards, playing with avatars on the computer. One of our nemeses, was a woman named Elayne who possessed a New York accent and was as obnoxious as could be. I'm currently still planning her demise.

All and all our trip was great. It was a good getaway, took me out of my comfort zone and even when we rented a bicycle built for two and MJ tried to run me into the ocean, I had fun. I got to use some muscles that I'd thought were put away for good, but to my surprise, still had the audacity to pain me when used.

The upstairs neighbor became a focal point. Not because she was special in any way, but because of her neurotic habit of pacing the floors from morning, about 5 AM until the late night. There is no way in the world that a person can appear normal after listening to her pacing incessantly for hours on end. Here is her story. She is from Colorado, divorced, about 54 years old and ugly as dirt. MJ said she has a good figure, but she must have been only looking at her lower calf. The rest of her was less then shapely possessing a linebackers neck...........and face! (Sorry, I call'em like I see'em.)

After cancelling our dinner with her, MJ told her a white lie about our attending her Thanksgiving meal, that Mel is a gourmet cook and insists on cooking just the two of us a private intimate dinner. The truth is, if I'm not ordering a pizza, we're not eating! Finally on Friday evening, we couldn't avoid her anymore and I was forced to meet Terry. Jesus H. Christ, what a mess??? Her condo was pleasant except for her. She was introduced to me and never stopped talking long enough to ask a single question. She must have a private air supply, so she doesn't even have to take a breath. She talked and rambled and changed topics without warning, leaving me trying to figure out how the two stories came together, but soon realized I was wasting my time even listening to her. It was then I shut her out and decided to listen to rap music, but it was just in my head. See, I even found the beauty in rap music.

Terry received a phone call that she needed to take, as it was from her brother in Japan. She left the room to talk in privacy and that's when I looked over to MJ and recited these words. "GET US THE FUCK OUT OF HERE, NOW!" MJ smiled and said I could stand to learn a little patience and it was a holiday and Terry's not that bad, but I just continued to stare her down until she agreed to end our visit early. As we exited, I actually heard MJ make plans for the 3 of us to go out for pizza the following night and that's when I fantasized the first time, picturing myself choking her to death as a piece of pepperoni laden pizza was spewed from her mouth. We left.

The title of this post is the name I've affectionately given to Terry and she will forever more be known only to myself and MJ as Butt Stank.

Other than that, the trip was great. We walked, we rode a bike, we ate sea food, shopped Coronado Island and slept great..
Posted by Things I Left Behind at 11:31 AM

Time to get rid of the pic...I want more pie. NMS