A Well Deserved Day Off! 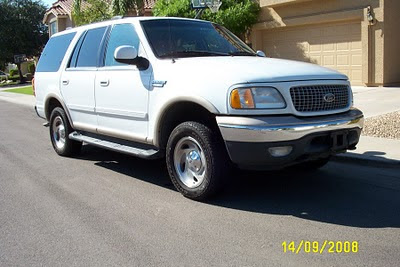 1999 Expedition 4X4 Baby
After working yesterday (not really) I decided to take the day off today. I needed to catch up on a few things. I spoke with my friend Barry yesterday and I told him of my plan to go back to work. He was in agreement that it was probably what I needed. He asked me what cars I owned and I told him, about 5. When I mentioned the Expedition, he asked me why I don't get rid of it. Of course that made me start thinking. I've had it since 2002 and I paid about $18,000 for it. I used it to transport the dogs when they needed to go to the vet and I always thought about how comfortable it would be on a long trip. But frankly, with the 15 mpg it gets on the highway, who could afford to drive it very far? So today I devoted to getting it ready for sale. I looked it up in the Autotrader and saw that they were bringing around 6 or 7 thousand, so I cleaned it all up and placed an ad for $7000.

Now for the dating portion of my life. MJ called me last evening on her way to meet a girlfriend for dinner. Somehow I moved the topic to women. I began by screaming into the phone, "I'm just through! I've had it." She asked me about the latest and although I didn't really want to bore her with my current qualms, I will take this opportunity to enlighten you.

First there was a lady in Mesa. For me to even attempt a relationship in Mesa takes a lot. I have to have a genuine interest. This lady was bright, informed and quiet. She claimed to be a writer, but was less than articulate speaking on the phone. She somehow discovered my blog before I ever told her about it, something that I don't offer to my encounters. She pulled back saying she did not want to be exposed to the world on my blog. I assured her that she would be exempt, as long as she was not a weirdo. Unfortunately she was though. She told me she was a widow, whose husband had died a horrible end including paralyses. I legitimately felt sorry for her and him, of course. Then she told me she'd never had a failed relationship and didn't want to take that chance now. She claimed I scared the shit out of her, not something pleasant to hear, but yet she stayed with me for a few days. One night rather late I called her and she told me she didn't want any kind of a relation, but to just date. Gee, that's NOT what I'm looking for at all. She was going on and on how she wanted to meet lots of men and all I could think of was, when was she going to finish this rant so I can tell her I'm not interested. I casually waited for her to finish and said, "since you and I are definitely looking for different things in life (and she lives in MESA), I wanted to thank her for her participation with me, but there was no point in continuing. I could tell she was getting that "I just got dumped" feeling and hung up. Mesa, Jeez!

Next was Rhonda. Rhonda was a little girl, about 5' 2" and thin. 58 years old, but turned out to be 59. (cuz lets face it, men are looking for 58 not 59) I spoke with Rhonda for about an hour and a half and I had to carry the entire conversation, but I gave her the benefit of the doubt because a lot of women are a little shy when they first speak with you. Rhonda had given me her home number which lead me to her street address and full name and age, so going in I knew she had fibbed. Not a very good reference for someone that the very first thing you find out about them is a lie. Moving ahead, she told me she was very tired that she worked for a living. When I told her it was about 11 PM, she acted like she had just been stabbed through the eye with an ice pick. We hung up. The next time I called Rhonda was on the weekend. There was no answer and no answering machine or voicemail. That's just odd! Was she on the other line and didn't want to switch over. Did she have called ID and could see I'd called?

I called Rhonda on Monday at about 8 and she answered. Again we chatted for about an hour or so, with her offering zilch to the conversation, aside from her New York accent. I was becoming more and more disenchanted. Finally I said, how about meeting me for a cool refreshing drink tomorrow evening? Long pause. Her answer was, I work. I get up at 4 AM to get ready for work and put in a 16 hour day. I asked if she delivered milk? She said, no. She was a paralegal. That's when I said, how about 7 till 8 then. Just to meet each other. She said, no she was too tired, but the weekend is fine. This was Monday. I'd already wasted 2 weeks on her getting to this point. Then she said, this weekend is no good. She was going away for the weekend, how about next weekend? I told her to call me when she returned from her trip and said good night. At some point during that conversation, I asked her how long it had been since she was married and she told me 20 years. I really knew at that point we were done!

More to come!
Posted by Things I Left Behind at 3:19 PM

eToro is the most recommended forex broker for beginning and pro traders.